Socially engaged art, also referred to as social practice, involves artwork which seeks to encourage social discussion and collaboration. For the socially engaged artist, social interaction is their material. In 1991, Suzanne Lacy, a UCSB graduate and artist, whose work is currently on view at the Art, Design, and Architecture Museum, coined the term “new genre public art” to describe American public art which went beyond sculpture, involving the artist and a more distinctly emotional relationship. New genre public art served as the predecessor to the terms socially engaged art and social practice, which are commonplace in the contemporary environment. Due to the inherent necessity of social interaction in social practice and dialogues that may result, social practice and activism go hand and hand. Art of this type is often bordering on, if not overtly, political.

This past fall, the Art, Design, and Architecture Museum showed an exhibition entitled The Schoolhouse and the Bus: Mobility, Pedagogy, and Engagement, which parallels two projects by the aforementioned Suzanne Lacy and Pablo Helguera. These two artists are unified by their dedication to social practice.

Suzanne Lacy’s project, entitled Skin of Memory, involved the collection of personally significant objects from residents of Barrio Antioquia, an incorporated community of Medellin, Colombia. There, personal objects were displayed on a redesigned bus, resulting in a mobile museum. First executed in 1999, Lacy responded to the anxieties and pain stemming from the drug and gang violence prevalent in Medellin, Colombia, in the 1980s and 1990s. By bringing together a visual representation of the grief and memories the people of the Barrio experienced, and displaying them together and in an accessible way, Lacy fostered a sense of community and resilience. As people connected through shared experiences, hope for the future arose. 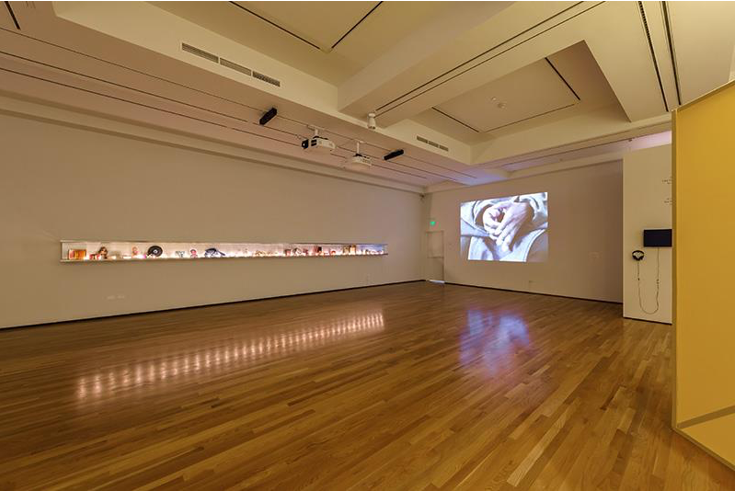 Some of the objects collected by Lacy and displayed on the “mobile museum,” on view at the Art, Design, & Architecture Museum

In 2011, some initial participants revisited the project to reflect on the how they were influenced by the earlier iteration. Skin of Memory is a poignant example of social practice art, for which Lacy is so well-known. Her mobile museum displayed personal objects, visualized memories, and generated shared emotions. As a result, the community of Barrio Antioquia engaged in outward discussion regarding cultural struggles over drug and violence and were able to relate more authentically as a community.

Pablo Helguera, a Mexican artist who cites Suzanne Lacy as an influence, led the project, The School of Panamerican Unrest, which he facilitated in 2006. Stopping in 29 locations across the Americas, from Alaska to Chile, Helguera facilitated discussions, performances, and led each community in the creation of a “Pan-American address.” Helguera sought to encourage the concept of Pan-Americanism, which refers to an idealized relationship in which the entirety of the Americas come together in collaboration. At each stop, Helguera would erect a yellow collapsible replica of a schoolhouse which, complete with an image of a bell, signified that “school” was in session. In conjunction with the actual engagement of these various communities, spanning across the Americas, Helguera kept journals, collected ephemera, copied down each “Pan-American address,” filmed stages of the process, and later reflected on his journey through collages. Helguera facilitated conversations and workshops across the entirety of the American continents, connecting American people through the process.  Helguera’s project was reliant on social interaction and participation, a clear example of socially engaged art.

A replica of the yellow school house utilized by Pablo Helguera throughout his project, on view at the Art, Design, & Architecture Museum

Socially engaged art, or social practice, necessitates social interaction through artwork, participation serving as a medium and often has a political or activist connotation. Suzanne Lacy and Pablo Helguera, whose works were showcased alongside one another, at the Art, Design, and Architecture Museum, are both experienced and talented practitioners of this dynamic art form. Social practice remains significant, involving communities and striving to make change in a powerful and engaged way.