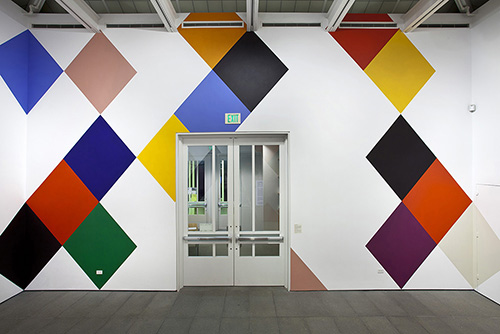 ‘The Westfall Project’ consisted of an outdoor mural and a four-walled room painting inside the Art, Design & Architecture Museum. The project took three weeks, one head artist/designer, two assistants, and six interns to complete. I had the great honor of being of the interns, and it was spec-tac-u-lar. The exterior wall was completed using standard outdoor house paint and masking tape to achieve the clean lines. I only worked on this portion for one day, mostly taping and laying down base coats. However, I was there when a row of tape was removed; I don’t know if you’ve ever painted using tape to create edges, but using this technique to reveal a crisp line is such a satisfying feeling.

We tackled the interior room is the same way, however, unlike the outdoor wall; very few colors were touching each other. The room is 17 feet high, with four walls, three door ways, and a vaulted, frosted glass ceiling. The layout of the room is actually very similar to that of a chapel, which served to give the piece an ethereal feeling.

Stephen Westfall, the lead artist and designer, based the rooms composition off of his understanding of color relationships. The room is made up of differently colored diamonds that sit within a grid. There is no clear ground or figure, which causes a lack of spatial differentiation, meaning the shapes seem as though they’re floating. If you’ve been in the room you’ll notice that not all of the walls are painted and a lot of white is showing. Now, I can’t remember the name of every color we used, but I remember the important ones (my favorite ones); taupe and distant grey. The reason I remember the taupe is because it was the only neutral used in the diamonds, which when placed next to saturated colors becomes an optical illusion causing our eye to mix a little of the color next to it with the taupe shape. This illusion made each taupe take on a different nuance and transformed this neutral color into something dynamic. My personal reason for liking it is because I’ve never seen a neutral come alive like that, especially when placed next to a fuchsia diamond. The distant grey is different though, that was the color used for the majority of the walls and to the human eye seems white. My professional reason for enjoying it is because it too serves as an illusion, it has just enough pigment in it to pull it forward into space and put it on the same plane as the diamonds. Although, the reason its my favorite is because while I was hanging off the side of a 17 foot ladder painting a taupe diamond; I heard Steve say “Man, do I love this grey, but on a side note are you all okay listening to the score from Lord of the Rings?” Of course we were all okay with that, but instead of replying ‘yes’ I made a joke about “Gandalf the Distant Grey” and Stephen nearly fell out of his chair. He reminded me about it at the exhibit’s opening and there’s just something about a successful artist remembering something an aspiring artist said that makes you feel a unbelievably accomplished.